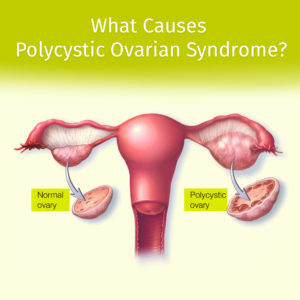 The cause of PCOS is not yet clearly known. It sometimes runs in families. If any of your maternal relatives (mother, aunts, and sisters) are affected with PCOS, your own risk of developing PCOS may be increased.

The symptoms of PCOS are related to abnormal hormone levels. Testosterone is a hormone which is produced by the ovaries. Women with PCOS have slightly higher than normal levels of testosterone and this is associated with many of the symptoms of the condition.

Insulin is a hormone which regulates the level of glucose (a type of sugar) in the blood. If you have PCOS, your body may not respond to the hormone insulin (known as insulin resistance), so the level of glucose is higher. To prevent the glucose levels becoming higher, your body produces more insulin. High levels of insulin can lead to weight gain, irregular periods, infertility and higher levels of testosterone.

Insulin Resistance can cause PCOS in two distinct ways. Insulin resistance reduces the insulin sensitivity of your cell walls. Glucose has to pass through those cell walls to be converted into energy. Insulin assists this process. But since the cell walls have become de-sensitized to insulin, by insulin resistance, the process does not work. Glucose “bounces” off the cell wall, instead of passing through the insulin door to be burned as energy. With the cell door almost closed to it, glucose remains in the blood stream, causing elevated levels of blood sugar, which are sent to the liver. Once there, the sugar is converted into fat and stored via the blood stream throughout the body. This process can lead to weight gain and obesity, key factors in creating Polycystic Ovarian Syndrome.

Insulin resistance raises insulin levels in the blood stream. Unhealthy lifestyles and genetic conditions cause the pancreas to overproduce insulin. The de-sensitized cell in turn, overwhelmed by this excess insulin and an excess of insulin “rejected” by the cell then free-floats in the blood stream, creating unbalanced hormone levels in PCOS sufferers. Excess insulin stimulates the ovaries to produce large amounts of the male hormone testosterone, which may prevent the ovaries from releasing an egg each month, thus causing infertility. High levels of insulin also increase the conversion of androgens (male hormones) to estrogens (female hormones), upsetting a delicate balance between the two and having a direct effect on weight gain and the formation of cystic follicles or cysts in the ovary.

Hello
Can we help you?